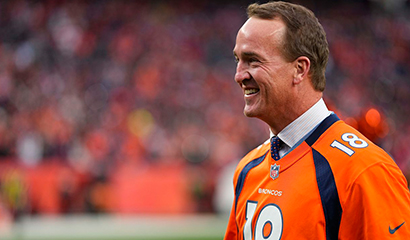 Sports professionals in the limelight are offered the perfect opportunity to give back, especially after overcoming their own adversities or that of a close family member. Peyton Manning, famed football star, overcame a problem of his own after being born with a cleft palate.

A cleft palate is a physical deformity of the mouth, when the two plates of the skull that form the hard palate, also called the roof of the mouth, is not fully joined, causing a gap. As is the case with most children suffering from a cleft palate, Manning faced several challenges. As a baby, Manning had to use special bottles, because the hole in his palate caused the milk he was being fed to come out his nose.

As a child, Manning had two surgeries over the course of 18 years to close the gap in his palate and to make sure it stayed securely closed as he grew. He also needed a bone graft to fill his upper gum line at age 8, which helped stabilize his upper jaw and allowed his mouth to support permanent teeth. Dental visits were a constant, as were braces, which he wore for over ten years (ages 4 – 15) to help straighten his crooked teeth as they erupted into the mouth which was further compromised with extra teeth. Cleft palate patients also often have issues with congenitally missing teeth which can further maximize the improper eruption of permanent teeth as a result the jaw malformation prior to birth.

Peyton Manning’s struggles were not only physical but mental as well. Due to his many health issues and physical appearance, he was often bullied by other kids and called names. Through it all, he followed his dream to play football, which led him all the way to the NFL. Read the full story.

The Pediatric Craniofacial Center at Peyton Manning Children’s Hospital at St. Vincent provides diagnosis and treatment for more than 60 disorders or deformities in which cosmetic and functional improvement would benefit the patient.

As orthodontic specialists who specializes in the growth and developmental of the upper and lower jaw, Wu Orthodontics in Palo Alto CA has treated patients with cleft palate and cleft lip problems. For more information about our orthodontic services, contact our office for a complimentary evaluation to determine the best course of treatment or to schedule a complimentary initial consult.